Undomestic has announced that they are manufacturing frames “at this moment” and that pre-orders will open in Summer 2020 (European summer, that is). They’ve also hinted at including “top of the line” Magura brakes on all their bikes.

Undomestic is an up-and-coming mountain bike brand that’s positioning themselves as “high-end”. They’ve announced the release of three all carbon, Pinion-powered enduro bikes: the M7, M9 & M97. The company is being a bit secretive about the finer details of their new M series mountain bikes, but here’s what we do know:

The bikes will use the rather heavy Pinion C-line drivetrain. Pinion gearboxes replace the traditional derailleur system with an enclosed gearbox in the bottom bracket area of the bike, which has gear range and maintenance advantages over a derailleur-based drivetrain. It remains to be seen how these bikes handle shifting under load, with reports that the Pinion gearboxes struggle with this task. Undomestic has said they’re working on an electronic gearbox, perhaps to remedy this issue.

Undomestic’s M series bikes will come in a number of configurations. The M7 will feature 150mm rear travel and 27.5″ wheels, while the M9 is a 29er with 140mm of travel. The M97 (see what they did there) will be available with both wheel sizes and 150mm of shock travel. The series will be kitted out with Fox suspension, hubs from Industry Nine and wheels from Crankbrothers.

Undomestic says their bikes will be made with 8% recycled automotive carbon and will be offering them in 6 different colour schemes as well as a frame-only option.

“With my team of riders (who are also engineers and designers) we have been working for the past two years to develop a line of enduro / all-mountain machines.”

He also wrote about their selling points for the bikes:

“So what is the new M like? We can share that the bikes will obviously have great refined design, modern geometry and a patented suspension platform. The platform is based on Horst, with improved kinematics for a gearbox. The machines will come with a Pinion C-line drive train, combined with grip-shifting, trigger shifting and later with our patented electronic shifting. This offers great traction at all times, fast shifting, 115% anti squat in all gears at sag and centered weight distribution.”

The new brand will be selling bikes directly to consumers in Europe but does not yet have a distribution strategy for the US or Australia.

Purpose Of The New Brand

The company’s founder also wrote about their mission and purpose:

“Maybe first of all to inspire people to ride. Ride better, ride faster, with more confidence. To help people want to go out of the cities, explore the undomestic nature, also those that have never ridden before. With my team we have been for over a dozen of years in advanced design and development of sport products. Now we combined all our experience with our passion for riding. I have been riding since 1992, mostly in Germany, Luxembourg, Slovenia and Croatia. So, it kind of was time to create products of our own.”

He went on to talk about their goals to build sustainable mountain bikes:

“Apart from our passion for riding and innovation, we also had for a long time the feeling we wanted to do some experiments about how to make sports products a bit more sustainable. Therefore we apply now about 8% recycled carbon fibre that we get from an automotive carbon manufacturer. There are also plans for reuse of the frames after crashes and when you send your frame back to us at the end of life, we will recycle it for you. I know, it does not really make a large impact yet, it is more an experiment and an honest try to improve the cycle without greenwashing.”

It’s great to see bike companies with this mindset, especially with the amount of waste carbon manufacturing produces.

We’re looking forward to seeing more of Undomestic and their new M series mountain bikes. In the meantime, you can check out their website here. 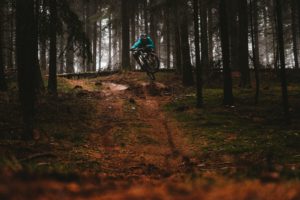 What is Mountain Bike Database?